Recently I have had a number of calls from members who have had disciplinary or performance issues with staff members which are on the cusp of a decision to terminate. The common theme amongst these queries is a general view that goes along the lines of ‘I want to make sure I get this right because I don’t want to end up with an unfair dismissal case’. As a result I wanted to post this article in relation to this sense of ‘fear’ that seems to be fairly widespread amongst our members. 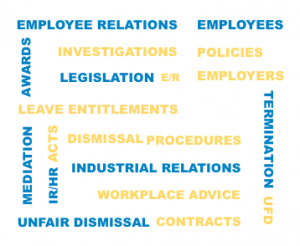 The first point is that no matter how good you are at managing your people, how solid your systems and policies that support you or even how serious the reasons for termination you simply cannot avoid being involved in unfair dismissal proceedings if an employee has the right under the Act to take one.

The reality is that if you have less than 15 staff and your worker has been with you for more than 12 months they have the right and if you have 15 staff or more then employees will also have the right to take action  after 6 months from commencement of employment. The system is simple for them to initiate by paying a nominal fee of around $69.00 and filling out and lodging the correct form (Form 3) which is easily accessible on the Ombudsman’s/Commission’s website thereby initiating the process. They have 21 days to lodge the form (28 days if you are a State employer) and the system is almost identical whether it be Federal or State.

The result of this for many employers is a sense of ‘fear’ that they have no rights at all and are powerless to take strong action. In effect as a result they almost totally disenfranchise themselves from running their own business and empower the employee to display even worse performance or behaviour.

Ultimately then this becomes a ‘risk management’ strategy from a business perspective, where you must measure the scale of ‘damage’ that the rogue employee is causing compared to the potential fallout from a conciliation conference as a result of an unfair dismissal application. When we speak of ‘damage’ there are a wealth of factors that need to be taken into account and these include but are not necessarily limited to the following:

Personal issues that may include anxiety, frustration, fear, powerlessness and illness amongst other things resulting from a situation where an employer feels incapable of effectively managing the situation. Faced with such a dilemma the choice to terminate an employee may be the best decision in the immediate term and can have profound effects on the business almost immediately. The result of this action reinforces management’s position amongst other staff, can bolster team morale and boost productivity as well as restoring integrity to operations. The effect on personal life can also be profound as a result of taking this action as personal factors can almost immediately be relieved once the ‘issue’ has been removed from the workplace and day to day operations can return to ‘normality’.

This means that employers need to be aware of the risk factors, ensure that as far as possible they have followed a clear process and are prepared mentally and physically for a potential application. Physical preparation does not mean a build up of ‘Rocky’ like proportions, but the systematic preparation of documentation relating to the employee and the steps taken to manage them leading up to the decision to terminate. It means that you gave the employee the ‘right of reply’ and that you followed up your decision in writing to the employee which clearly reiterated the reasons for the decision and summarised the issues that lead to it.

NO…there are no guarantees that this will result in the Commission throwing a claim out but it does clearly illustrate that due diligence was followed and that you had a clear process for managing it. The process should not deter you as the employer from taking strong action when required, Conciliators in our experience take a very realistic view of matters, whilst they are bound to uphold the provision of the Act in terms of process they are also very good at ‘reading between the lines’ when matters are presented logically to them. It may mean that a commercial decision must be made (ie paying some money) to the employee in terms of settling the matter but whilst this may add a feeling of ‘insult to injury’ in settlement of proceedings it becomes a straightforward business decision – nothing more and nothing less. Often referred to as ‘go away money’ this is also a factor that should be taken into account when considering potential fallout from a decision to terminate. Ultimately many employers feel that making a payment is far more acceptable than putting up with the antics of an employee who is causing grief along with the potential for protracted sick leave, workers compensation claims and bullying and harassment claims from the rogue worker.

In our next issue I will talk about other claims that are on the rise under ‘General Protections’ these are far less common at this time but it is important to be aware of how these are managed. In business as in life the saying ‘you don’t know what you don’t know’ can prove to be your Achilles heel.

Don’t forget that we are here to help you but please call us prior to taking action and not afterwards wherever possible, it’s too late to take proactive steps once a course of action has been taken.